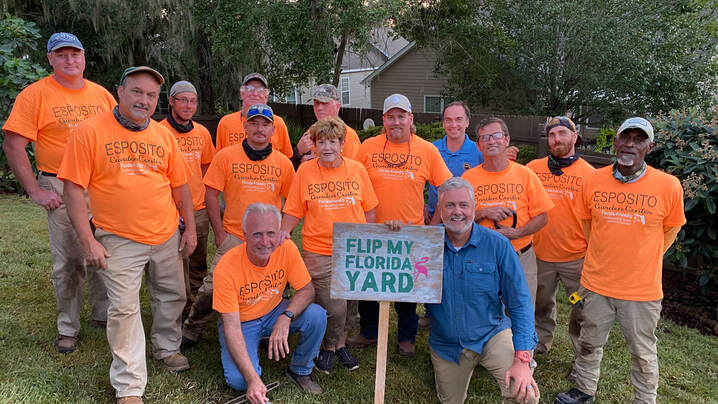 The Series
Emmy® award-winning director Chad Crawford has teamed up with the Florida Department of Environmental Protection to show how homeowners can create a landscape that is more in tune with Florida’s natural environment using drought-tolerant plants and water-saving techniques. “Most people want an environmentally-friendly yard, they just don’t quite know how to go about doing it,” says Crawford. “Well, this series is going to show you how to do it step-by-step.”
Flip My Florida Yard is filmed in locations throughout Florida showcasing a wide variety of settings, including small urban developments, coastal and waterfront residences, multi-acre rural properties, and neighborhoods with HOAs.
The crazy part, the flip crew only have 8 hours to completely flip the yard before the home owners come home for the big reveal. Each show features Florida-Friendly Landscaping principles developed by University of Florida’s Institute for Food and Agricultural Sciences. These principles are research based and proven to reduce environmental impact on Florida’s environment.

“Our mission is to show Floridians how they can take part in helping our environment by starting in their own yard.” -Host Chad Crawford
Link to the Florida-Friendly Landscaping principles
The Series Creator/Host
​Chad Crawfordʼs strange love affair with the Sunshine State might seem…well…downright nutty to some folks. He would be perfectly content to live off of oranges (exclusively), fish all day long (lakes, oceans, you name it), and travel the state, falling more and more in love with his home. A third-generation Floridian, Chad graduated from high school in Sanford. He quickly realized that his dreams of becoming a pro surfer and skyrocketing to fame were not attainable, so he joined the Navy, where he was dubbed “captain of fun.” After completing his service with the Navy, he attended Full Sail University, graduating with a degree in Video and Film Production. A creative mind plus an entrepreneurial spirit make for an unstoppable combo, and he has them both. For Chad, the sky was the limit.
The Company
Over the past 20 years Crawford Entertainment has become recognized for its nationally-syndicated television programs and Emmy® award-winning original television series.